The location of sections hosting the sports events were carefully selected. These sections were analysed and all the possibilities were thoroughly studied, taking into consideration each time the suggestions from the International Canoe Federation (ICF), from team leaders and from athletes of different national and international clubs that have participated in previous events.

The race is carried out in various sections of the river La Noguera Pallaresa, in the county of El Sobirà Pallars. They all meet the requirements of Wildwater Rule 19 of the ICF and are suitable for Classic, Sprint and Teams Races.

The classic course runs all along parallel to the C-13 road. The river is visible from this road and there are several checkpoints along the route for paddlers, as well as for the media, team leaders, spectators, employees, organization and security.

It is a 6,800 m distance course, with a level of difficulty III, combining rapids with parts in other areas where paddlers will be able to re-accelerate the kayak to face another section with rapids.

The rapids are the following: the route begins at the Pla de la Moleta, to enter, after taking the right side, in an area of continuing rapids for about 2 km (difficulty III-IV), to the Bridge of Gulleri. After the bridge, the next step is the Salt de l’Àngel, a stopper of difficulty IV, which is passed through the right. The next rapid is the Sirga (difficulty III), another hole, which is taken through the centre-left. In the Island, difficulty III, the river divides into two similar branches, although the left is the fastest. The last rapid, the Spanish Four is rated as a IV in difficulty, which is followed by a stretch of about 2 km to the arrival in Rialp.

The Sprint Race will be held in Sort, in L’Aigüerola Wildwater Course. This race course, built in 1993 on the stretch of river that runs through the centre of Sort, has been rated III in difficulty. It is provided with electrical installation, telephone, stands, speakers, illumination equipment and a pre-installation for electronic timing.

The main features of this race course are its navigability for sports at any time of the year and a stable equipment for training and competition. 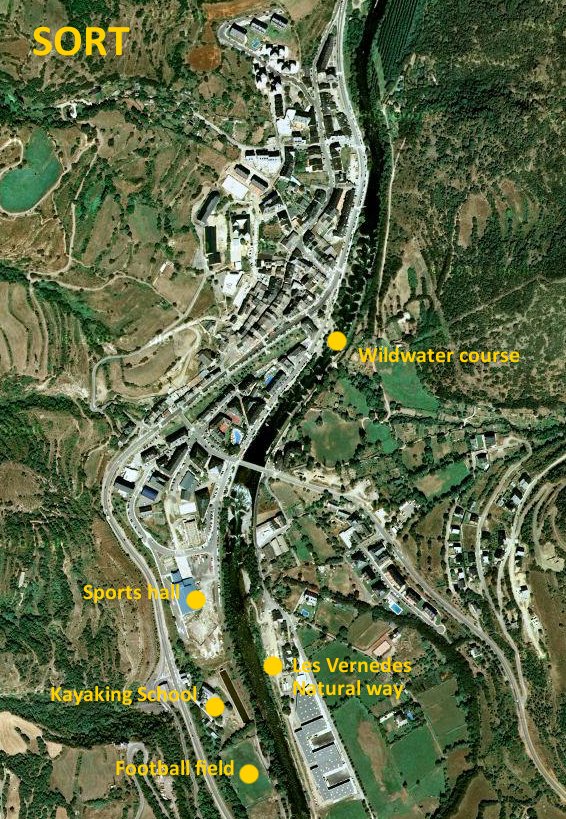